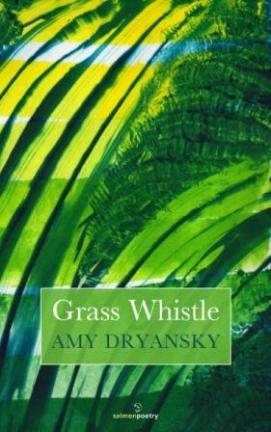 I’ve been tagged in a blogging project called ” The Next Big Thing,” so since this is mine, read on if you want to know more about the book.

First, thanks to Ellen Dore Watson for inviting me to do this blog-tag shenanigan. I wasn’t sure how it would go, but it was totally fun. Ellen’s interview is here: http://www.massreview.org/blog/next-big-thing. Check it out! Ellen is an amazing poet and translator and all-around mensch of a human being.

So, here are my answers to:*Ten Interview Questions for the Next Big Thing*

What is your title of your book?

The title of my new poetry collection is “Grass Whistle.” Due out from Salmon Poetry in March! Since Salmon is an Irish press, even though it will be “launched” at the AWP conference in Boston, it officially comes out in Ireland/UK first, and then in the US in the fall. But it will be available for pre-order and on Amazon very soon.

Where did the idea come from for the book?

I didn’t really have an “idea.” I don’t usually know what I’m writing until after I write. But I certainly have obsessions and those surface throughout the book. The title of the book, and the epigraph I chose definitely reflect those obsessions. The epigraph is from Richard Brautigan’s, “In Watermelon Sugar:”

“Wherever you are, we must do the best we can. It is so far to

travel and we have nothing here to travel, except watermelon

sugar. I hope this works out.”

The idea of “watermelon sugar” being all we have to find our way, and making “music” from a blade of grass and our breath comes from a feeling/notion (fauxtion?) I have about making what we need from whatever materials are at hand, even if those materials are limited or flawed.

I think that idea comes from my childhood, being part of a family that valued the act of making things (art, writing, cooking, furniture, clothes) and also of working toward something—a goal or ideal. So if I wanted something I was expected to figure out how to get it, and make what I had work as best I could (this was way before re-purposing, mind you).  Anyway, most of the time what I ended up with didn’t resemble what I thought I was making, but it taught me a lot about process, and the value of mistakes.

I’m pretty sure this notion also comes from my early years as a parent, when I felt like I was always messing up, and trying to figure out how to adapt to my new life: the total lack of time and space for writing. At first I kept banging my head against the wall about not being able to go to my desk first thing in the morning and not be interrupted, blah, blah, blah. After a while (a pretty long while, since I’m a slow learner) I figured out that I needed to let go of my old way of doing things, quit whining, and just get stuff down when I could, jam in the time between feedings or whatever and make that my new process. Make it work.

In a larger sense, the poems in the collection are “about” where we find ourselves in life at any given moment, and what we do with that. The speakers in my poems are often either moving (physically or psychically) or stuck, and waiting to move. Maybe deep down the book is about the illusion of progress and how I need to believe I’m moving forward even when I’m still the same old me.

Which actors would you choose to play your characters in a movie rendition?

Well—Lili Taylor would play me. I don’t even need to think about that.  And maybe Liev Shreiber—because I have a crush on him–can play my husband. And Meryl Streep can play everyone else.

What is the one-sentence synopsis of your book?

How about: “Girl refuses to read map or ask Siri, resulting in ‘Lost’ meets ‘Lost in Space’.”

I can’t actually explain it in one sentence, so here’s the official description:

“In her second collection of poems, Dryansky’s intrepid speaker sets off once again, this time into the deceptively open field of adult life. Along the way she pushes at the boundaries of identity and connection, questioning our perceptions of selfhood and motherhood, marriage and relationships, fidelity and faith. These poems have a sense of humor; they play with language and meaning, but the questions they ask are serious: what do we want to be when we grow up? How will we know when we get there?”

(Other people have also said some really nice things about the book, but that’s for another post.)

Will your book be self-published or represented by an agency?

An agency. That’s so funny. I’m a poet! Who writes these questions?

How long did it take you to write the first draft of your manuscript?

This book was a long time in the making. I started it when I was an Associate at the Five College Women’s Studies Research Center at Mt. Holyoke College, where I was trying to figure out what I was doing as a woman/mother/poet.  That was 2004. Yikes!

What other books would you compare this story to within your genre?

Mostly, Dante’s inferno. But shorter. And I didn’t have Virgil as a guide, which could be why it took me so long to get to hell and back.

Who or what inspired you to write this book?

Well, I can’t not write. It’s the only way I can figure out what I’m thinking or feeling. But I did struggle mightily with the making of this book, and trying to figure out what my “context” was in my new role as what I like to call a Mother AND…I felt so snowed under by the idea that somehow my work would be labeled as “domestic;” it really stymied me. So, I believe I was mostly inspired by my own struggle and by other women poets, past and present, who are writing challenging, complex, and inspired poetry and managing to raise kids/work multiple jobs/care for aging parents at the same time.

What else about your book might pique the reader’s interest?

There are some sexy poems. Not many, but you can always skim the rest. Also, there’s food, pets, jealousy, murder and true love. The usual.

and so it goes…

Interested? Stay tuned for info about how to get the book. In the mean time, I’m tagging more folks in this project, and their posts will be up next week.  I’ll put those links up very soon.

3 thoughts on “the next big thing”