When the pie was opened, the birds began to sing… 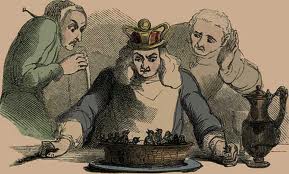 Turns out, of the four-and-twenty blackbirds, 20 were men and only 4 were women!

I know I promised to post the next installment of PM’s journey, but  an interesting conversation is bubbling up around a piece published by VIDA, Women in the Literary Arts, and I just can’t resist putting my oar in that water. Now, for those of you who see the word “literary” and stifle a yawn, it’s not like that! It’s not just about writing and writers, it’s about the reality for many of us women, especially Mothers AND…

So, the controversy is around a post by VIDA called, “The Count” that spells out in bold red and blue  just how much of the illustrious literary pie is being dished out to women at the “top” magazines in this country. Turns out it’s not a lot.

Surprised? No, Pokey wasn’t either. She’s been rejected by most of them.

But some in the literary arena are crying foul. They claim that it’s not a matter of discrimination, not that editors are more apt to choose work by male writers than female, but that fewer women submit their work for publication. We don’t put purselves out there. We’re just not aggressive enough. 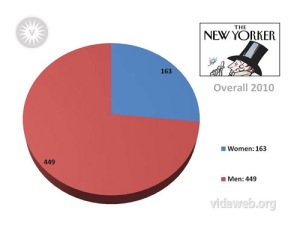 Really? Even if it’s true that women writers don’t go after publication with the same level of…vigor as men (and Pokey’s kinda dubious about that), as Jim Behrle says in The Hairpin:

If they [magazines] aren’t receiving enough poems, stories, and articles from women, how can they change their policies to get more? Are women being rejected disproportionately? How can that be addressed? At least in poetry, the quality of poems I receive from women and men is generally very similar. Almost identical. Do women have to go back to the bad old days of renaming themselves “George Sand” to get a fair shake in Literary Magazine publishing?

And Anna Clark wrote a great piece called Ambition Condition on this situation way back in 2008:

Ambition is a slippery creature in the lives of writers of all genders; no one is safe from feeling uneasy about affirming one’s literary ambitions, and insecurity is the devil of anyone who faces a blank page. But the thing is, women are more likely to be justified in doubting themselves. Yes, a woman is less likely to win the Nobel Prize in Literature: in 106 years of the prize, only 11 winners—about 10 percent of the total—have been female. In the Pulitzer Prize for Fiction’s 60-year history, female authors have snagged the award 27 times. Shaking out 57 years of the National Book Award for Fiction reveals a mere 15 female winners. 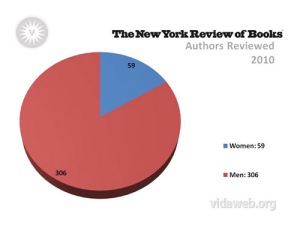 We’re not crazy. We’re not imagining this.  Just like in other areas of our lives there’s folks who, consciously or not, don’t value what women have to say, or don’t like how we say it, or think it’s not relevant, or whatever.  As the esteemed Dr. Samuel Johnson is reported to have said: “Sir, a woman’s preaching is like a dog dancing on its hind legs. It is not done well; but you are surprised to find it done at all.”

It’s tough to look good when your partners keep stomping on your toes.

Those of you who’ve been reading PM right along know that I’ve talked about this whole deal before (see Vanity). To be honest, it’s a big part of why Pokey Mama came to be: I got fed up with waiting for some higher authority (and I don’t mean that in a spiritual sense) to annoint me or my writing. I wanted to speak directly to you, reader, and give you a chance to speak back.

I get so happy when I hear from one of you about a post—not that I don’t love it when I get something published elsewhere, but it’s a diffferent kind of happy, there’s no give and take. Not like this morning, when my yoga teacher’s mom (who, BTW is in her 70’s and still doing handstands with the rest of us) told me how hard my last post made her laugh. Carol, are you reading this?!? Thank you!

I guess what Pokey’s trying to say in her usual multi-dimensional way, is this: yes, we are up against a hierarchy that doesn’t always welcome us, and is sometimes downright hostile. And even though we’re tired, and don’t have enough time, and we’re demoralized and there’s too much laundry to do, we have to keep naming it, and we have to keep fighting. Above all, we should not blame ourselves or walk into the river with stones in our pockets or any such nonsense like that.

Instead, I propose we support one another. If you take a look at some of the links on my blog you’ll see places where women writers and artists are not only included but applauded. You’ll also find films like “Who Does She Think She Is? where women talk honestly about the struggles they face as  artists and parents. There’s lots of us out here.

Lately though, Pokey’s been wondering: as artists and as Mothers AND…, is there more we can do to push back? To paraphrase our friend Fergie of the Black-Eyed Peas, do we copy their swagger, demand that the gatekeepers let us in, or do we turn our backs and walk our own kind of walk, make our own place to be? What do you think that place might look like?

Pokey’s not sure, but she’s guessing it’s not all rainbow-y like where My Little Pony lives. We should probably talk about that. In the meantime, she’s glad to be here, in Pokeyopolis, with you.