What is colic, exactly? Raise your hand if you think you know. Now, stand on one foot if you know someone who’s had a colicky baby. OK. With the hand not raised pick up something fragile and adored that weighs anywhere between 8-12 pounds. Got it? Oh, and it should emit a continuous, oddly-pitched screech similar to that of a table saw ripping through a sheet of plywood.

All set? Good. Tilt forward from the waist—no, no, don’t put that foot and arm down—bend forward and…balance. In yoga this pose is known as Nataraja, or Lord of the Dance. Nataraja is usually shown as standing with his foot on a small, writhing figure, known as the “personification of ignorant illusion.”

Doesn’t that feel good? Not really? Does your standing leg hurt? Do you wish you could go to the bathroom? Are you worried you might fall asleep and drop the bundle? Do you want more than anything for someone to take the bundle from you just for a teensy while?

Blink twice if you think I’m making too much of this. You may leave the room. It’s obvious you haven’t had a colicky baby. 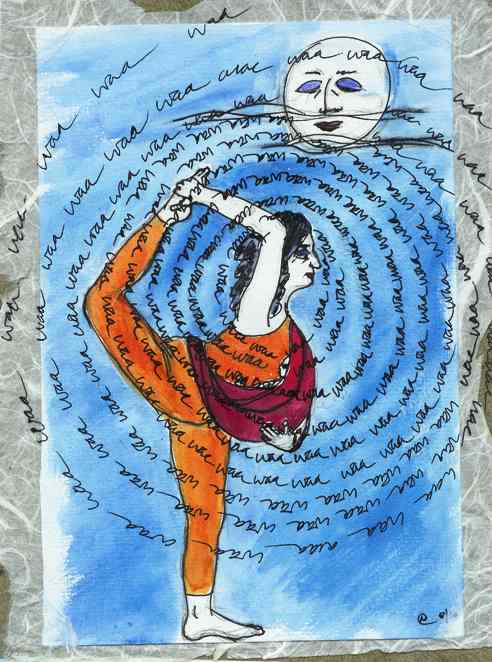 For about a week after we left the hospital my baby slept and nursed, slept and nursed. I was still pretty wrecked from the birth, the house was a shambles, but the baby thing was working. She was right on schedule with the different colored poops we were supposed to watch for, her scrawny red appendages filled out a bit, her head became less cone-shaped. I wouldn’t say that I was exactly experiencing maternal bliss, but I felt less as if I’d been run over by a truck—and I felt kind of…competent. All righty then. Pokey Mama can do this.

About day 10 or so, my daughter began to get “fussy” late in the afternoon. She would wave her arms and legs around, and start those clucking sounds babies make when they they’re winding up for a good one. I‘d have her strapped on with one of those slings that are so darned popular but that I could never quite get adjusted, so I had to keep one hand on her bum while I tried to throw some dinner together, otherwise I dropped all kinds of food prep into the sling and worse yet, was dangerously close to setting us both on fire. Mostly I counted out the minutes until John got home from work and I could hand her off.

At first it was just 20 or 30 minutes of squawking, usually just as we were about to eat. I’d stuff some food in my mouth, nurse, and wait for her to fall off my breast with that glazed look we called “milk face.” I loved milk face.  I loved that I was making my baby full and content.

But after a while, the nursing just wasn’t doing the trick; squawking evolved into full-out screaming, arm waving became full-body writhing. It was horrible to watch and completely demoralizing: rocking, singing, walking, bouncing, burping—she cried through it all. I changed my diet, took a baby massage class, went to a lactation consultant, read endless articles, tried soy formula, put her on top of the dryer in a bouncy seat, made her a tape of the vacuum cleaner, and John drove miles and miles at night with her screaming from her car seat. He and I had no conversations, only strategies. It didn’t matter. She cried and cried, usually from about 6pm until midnight, at which point we would drop into bed with her between us, our bodies taut with anticipation of the next waking.  It was coming, and soon.

Long story short—it took about six months for her to settle into her body and stop crying. Because that’s what I think it was, really. She just wasn’t altogether finished when she came out. Don’t forget, she didn’t want to come out. I was two weeks past my “due date” (don’t you love the language? like I was an overdue library book somebody else had on hold), they juiced me up with a drug that took my labor from 0 to 60 in about an hour, and then they dragged her out with a machine—which kind of makes me wonder why she liked the vacuum cleaner sound so much.

In my totally non-scientific way I deduce from all this that she was half-baked—those little nerve endings weren’t finished, and she didn’t like the feel of the air on her skin. It didn’t have anything to do with what we did or didn’t do.

Per usual for Pokey Mama, at the time of the actual colic I didn’t have the wisdom of distance, and despite my self-professed hard-nosed, feminist world view, apparently I’d developed a pretty elaborate fantasy of what it would be like to be a new mother. Sound familiar? Remember the “perfect” birth? (Why do I keep doing this?)

Somehow we got through the colic. And not long after, Pokey snuffed deeply from the well of forgetting and got pregnant again, had another difficult birth and a baby who basically refused to sleep for the first three years of his life. Oh well.

I know what you’re thinking. You’re thinking, these baby stories are all well and good, Pokey, but you promised us a blog about motherhood AND…so, where’s the and? Good question. (And BTW, you can put the bundle down now.)

My guess is that it has something to do with self-delusion, that veil we wear, consciously or not. We feel safe behind it, and the world looks pretty good through it, too—softer, mysterious, but in a good way.

I think we can all agree that a little self-delusion is helpful. (Some of us might be reluctant to do anything without it.) It allows us to do scary things: have children, start a new relationship (or stay in one), get on a plane to places unknown, make art or write a poem that we haven’t figured out yet.

When folks talk about what makes art possible (and powerful) they talk about “negative capability” (John Keats), “purposeful purposelessness” (Suzanne Langer), being in the “zone” (Lance Armstrong?)and of course “waiting for the muse.”

In other words, when we begin the creative process we need to suspend a certain kind of judgment in order to enter a space of infinite possibility. We lower the veil. Once that groundwork is laid, we can step back with a more conscious eye and make choices, shaping and revising the raw material. But if we never allow ourselves to go to that scary, chaotic, inchoate place, if we deny ourselves that initial self-delusion, it’s likely the deadly conscious mind steps in and the art suffers.

As artists we move back and forth between these states constantly. Or we get stuck, which has happened to me, and which I can testify is the one of the most miserable things I’ve ever had to endure, right up there with colic! More about that later.

Pokey Mama needed to believe motherhood would be fabulous. Why else choose to give so much of my life over to this totally foreign state of being? And even though it was a shock to discover how truly hard it was (and is) I wouldn’t go back.  I’m here now, shaping and re-shaping this life, messing up and revising, over and over. Every once in a while I’m surprised:  Ah! Got that one right.

My son has become a great sleeper, my daughter an adventurous eater. He makes his own breakfast and gets himself dressed. She’s starting middle school. No more fussing, right? No more colic. No more elaborate disappointments.

7 thoughts on “Colic the Muse”